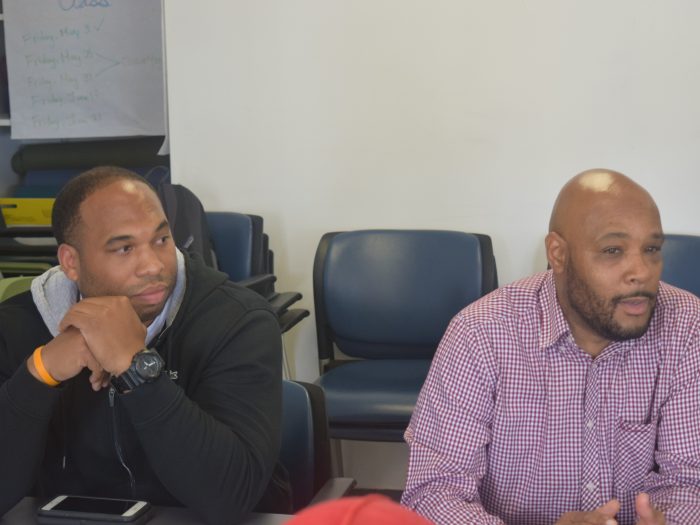 This month, CASES’ Education, Career, and Enrichment Services launched “Let’s Chop It Up,” a roundtable discussion series on community policing. The kickoff event at CASES’ Central Harlem office featured Detective Keenan Carter and Sergeant Daquan Bendele, two longtime employees of the New York Police Department (NYPD) who have worked in multiple boroughs. The goal for the series is to explore and constructively discuss some of the complications existing between communities and the NYPD with the hope of improving this relationship. The series was conceived and is curated by CASES’ Engagement Coordinator Edyson Julio, with support from colleagues Aaron Hardy, Andrew Hardy, and Demani Washington.

“Policing is an incredibly fraught issue both past and present,” said Mr. Julio. “While it is true that many officers abuse their power, it is just as true that many police officers are committed to improving struggling communities. This issue is far more complicated than we often think.”

Detective Carter and Sergeant Bendele talked with youth participants about what inspired them to join the police force and about their specific work with the NYPD. Youth and staff then shared stories about their experiences with the police in and outside of their communities. Participants appreciated that officers took the time to talk with them and provided honest commentary from a police officer’s point of view. They were particularly surprised that both officers admitted to having been profiled themselves while off-duty.

“We’re committed to giving the young people we serve opportunities to practice giving voice to their perspectives on the systems that impact so much of their lives,” Mr. Julio said. “Whenever possible we want them to have the chance to literally speak to power.”

Another installment of ‘Let’s Chop It Up’ is currently being planned for participants and staff at the Downtown Brooklyn office with officers from Brooklyn precincts.